Ethereum’s uptick in activities can be illustrated by the fact that burnt Ether stands at 608,567 ETH worth $2.089 billion since the London Hardfork or EIP 1559 upgrade went live on August 5.

This upgrade prompted the first-ever deflationary block on the Ethereum network because scarcity was introduced every time Ether was burnt after being used in transactions.

This feature helped in eliminating inflationary tendencies that the network was accustomed to before.

The London Hardfork upgrade also eradicated the use of other digital tokens for payment of fees on the Ethereum Network. Only Ether was utilised, thus restoring the unique relevance of the ETH cryptocurrency.

According to crypto analytic firm Glassnode: 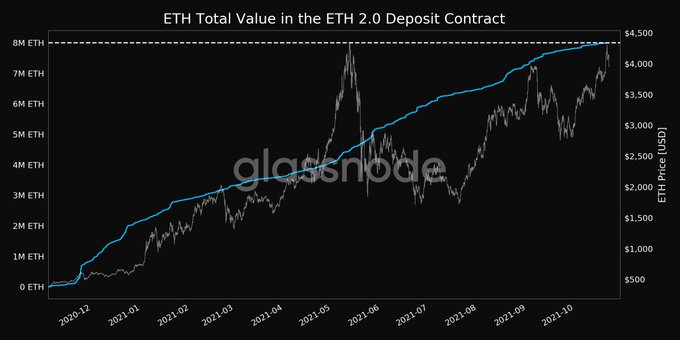 Ethereum 2.0, also known as the Beacon Chain, was launched in December 2020 and was regarded as a game-changer that sought to transit the current proof-of-work (POW) consensus mechanism to a proof-of-stake (POS) framework.

The POS algorithm allows the confirmation of blocks to be more energy-efficient and requires validators to stake Ether instead of solving a cryptographic puzzle.

As a result, it is touted to be more environmentally friendly and cost-effective. ETH 2.0 is also expected to improve scalability through sharding.

Israel intends to launch its CBDC on the Ethereum network

The trial intends to check the pros and cons of digital currencies, and the nation sees Ethereum as an ideal solution.

CBDCs represent the digital form of a nation’s fiat money. They are managed directly by the country’s central bank and are backed by national credit and government power.

To stabilise currencies liquidity which the seemingly inevitable cashless society in the future, many countries are now launching experiments to test the workings of CBDC.

In September, the Bank for International Settlements (BIS) teamed up with the central banks of South Africa, Malaysia, Singapore, and Australia to kick start a project dubbed Dunbar to test the application of CBDCs in cross border payments.

Floki Inu reaches the top of Burj Khalifa; Is it time...

Ethereum Leads ahead of Traditional Markets Performance over the Past 30...

Exploring The Origin Of Bitcoin