Finally, Ethereum is breaking its mid resistance area after 37 days of bear wins. One of the early signs of its strength is before the breakout at the EMA19, which is remaining firm with the help of Bitcoin’s recovery from $53000 up to $60000.

If BTC remains steady or sidelong in the coming days, we believe ETH is likely to hit its recent swing top at $4000. So far, everything is looking great for this second most valuable coin, and expecting a big move upwards as long as it can sustain above its previous resistance at $3600.

Ethereum (ETH) has surpassed the major resistance at the $3,600 level and successfully made it new support on the 4-hour timeframe.

This breakout might clear the track for the coin to test the all-time high at $4,380 again.

Profit-taking is expected as soon as we touch a price above the $4,000 mark.  However,  the ATH resistance can provoke a reversal until ETH finally breaks above it and enters the new price discovery once again.

According to the Chart below, 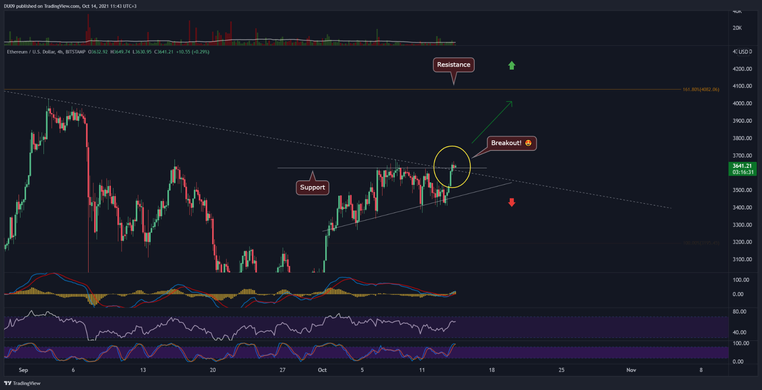 The breakout volume on the 4-hour timeframe looks very strong. However, a continuation is needed and higher volume to sustain the bullish trend.

On the other hand, the RSI on daily and 4-hour timeframes is climbing high. Immediately the RSI creates another higher high on the daily timeframe, the belief in this trend will grow.

MACD moving averages are also showing the bullish crosses on the four-hour timeframe. This is an excellent indication that price value is set to rise higher. However, on the daily timeframe, everything remains bullish and in expectation of a new rally.

The general preference is bullish, especially when the price sustains above $3,600. However, with a higher volume and more buyers coming in, ETH can continue pushing for higher grounds as it strives to reach the resistance level. If the price falls under $3,400, the current breaking should confirm a fake breakout.

Despite all odds, ETH can retest and break the major resistance at $4,000. A consolidation, though, is expected in a tight range because of notable pushback. Further will increases become inevitable soon so long the general market stays bullish.

At the time of writing, the ETH price is $3,947.75. Ethereum can break the emotional level at $4,000 before the month is over. However, it is possibly going to drive towards a new all-time high above $4,400 before the end of the year.

This future price, however, is also dependent on the course Bitcoin is taking. If BTC can sustain and grow above $60,000, all eyes are on a new high for Ethereum and other coins like Cardano and Solana.

Over the years, Ethereum has developed powerfully as more and more people invest in it. ETH price only started going upwards at the beginning of 2021. Market analysts are confident that Ethereum can go as high as it wants to be.

Shiba Inu Is Up Again With 33% Increase

Just 10 Korean crypto exchanges have registered with the government ahead...

Where to buy UniFarm as UFARM rallies by 80%

Floki Inu V2: Everything You Need to Know