Some projects can be ruthless the when you don’t do your research. Tsuzuki Inu token has proven to be one of these projects.

Just moments ago, most major crypto trackers like the Watcher.Guru has blown the industry with the heartbreaking news of a rug pull involving Tsuzuki Inu.

Tsuzuki Inu ($TZKI) developers have just pulled the rug on their investors, resulting in the loss of millions of dollars. The platform has since deleted its Twitter page, and you cannot post on its Telegram too.

Moreover, its price market chart on CoinMarketCap it is not looking good either- as the red on its price is blinding while the flat line on its market cap is unsettling.

Stock market analyst Del Crxpto has since come out regretfully through his Twitter page to express his thoughts on the issue. While he wishes that he had an opportunity to look into the cryptocurrency to warn people against it. It is unfortunate that, he was too busy in the week.

He further noted that many people were pointing a finger at @ShadowedEmbrac3, who was seen as the face promoting the project.

@ShadowedEmbrac3, however maintains that he was a victim too, but that isn’t stopping a few disgruntled investors from sending him several death threats. 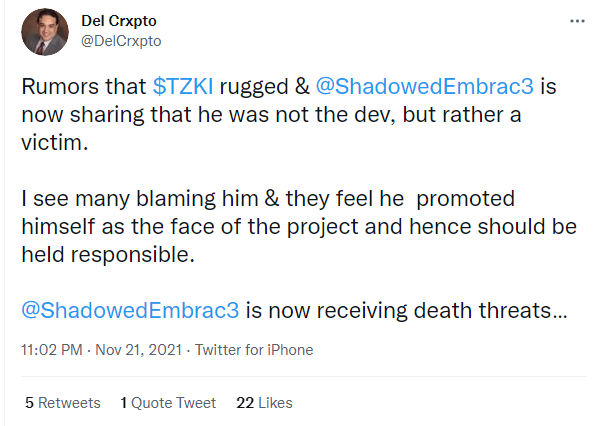 It is a disastrous situation- a rug pull, that is.

For those not familiar with it, it leaves investors with extreme losses. And could happen through phishing to gain sensitive information or just a blatant exit scam, as has just happened.

In an exit scam, the scammers design a promising project. With it, liquidity flows, resulting in price growth. And at an arranged time, the scammers pull all the liquidity, crushing the capital and leaving investors with nothing.

While such an occurrence is not new, the Squid-game-inspired cryptocurrency recently took a plunge, too- from a high of over $2,860 to a zero on an early Monday morning. We sincerely hope that no one put all their eggs in that one basket.

But remember to keep your money safe as you also stay safe.

Onecoin Victims Petition Bulgaria for Seizure of Assets and Compensation –...

Budweiser NFTs sell out within the hour and make their way...

Is Angela White a DogeCoin Whale?